You Don’t Have to Fear Carbs 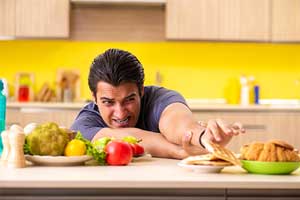 Carbs are now accused of causing weight gain, heart disease, and various other problems — just as fat once was. It’s true that junk foods tend to be high in carbs — particularly refined carbs — and that low-carb diets can be incredibly beneficial, especially for weight loss, diabetes, and certain other health conditions. However, not all carb sources are created equal. Refined carbs can be harmful in high amounts, but whole-food sources of carbs are very healthy.

Even though scientist once hypothesized that carbs increase the risk of obesity more than fat and protein. It’s not the whole truth, carbs are not uniquely fattening. The hypothesis, carbs are the primary cause of obesity due to their ability to raise insulin levels, which in turn promotes the storage of calories as fat. This idea is known as the carbohydrate-insulin model of obesity. Of course, excessive intake of any calorie-providing nutrient — fat, carb, or protein — is an effective recipe for weight gain and obesity. But no compelling evidence supports the idea that high-carb diets are especially fattening. The quality of carb matters more.

In early human existence learning to cook was a game-changer for early humans, as cooked meat provided increased protein, fat, and calories. Yet, new evidence indicates that carb-rich foods like root vegetables, legumes, and even grains were cooked and consumed by human ancestors as well. Cooked carbs would not only have been more nutritious but also more appealing to a hungry hunter-gatherer.

Though many people may believe that they have a gluten allergy only 3 out of 59 people actually do. Gluten is a protein found in wheat, barley, and rye. By cutting carbs from your diet, you automatically cut out gluten, too. A gluten-free diet is necessary for the small number of people with celiac disease or some other types of autoimmune disease. Gluten-free diets may also benefit people with nonceliac gluten sensitivity or wheat intolerance. Instead, it appears to be sensitivity to fructan, a type of soluble fiber or FODMAPs found in wheat.

Fiber is a Carb! Nutrition is rarely black and white. Still, most experts agree that eating fiber is good for your health. In particular, soluble fiber is known to benefit heart health and weight management. The thick and sticky soluble fiber found in high-carb foods like legumes, fruits, and oats helps slow down digestion. Fiber also increases the time it takes to digest and absorb nutrients, contributing to reduced body weight and improved health.

Gut relies on carbs for energy. The balance between beneficial and harmful gut bacteria may influence your risk for many lifestyle diseases, both physical and psychological. To grow, your beneficial gut bacteria need carbs that they can ferment for energy. As it turns out, soluble fiber appears to be the important nutrient they feed on.