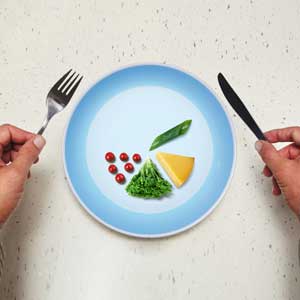 What does “starvation mode” imply?
What people generally refer to as “starvation mode” (and sometimes “metabolic damage”) is your body’s natural response to long-term calorie restriction. It involves the body responding to reduced calorie intake by reducing calorie expenditure to maintain energy balance and prevent starvation. This is a natural physiological response, and the technical term for it is “adaptive thermogenesis”. The term starvation mode is a misnomer, as true starvation is something that is almost completely irrelevant to most weight loss discussions. Starvation mode is a useful physiological response, although it does more harm than good in the modern food environment where obesity runs rampant.

Calories in, calories out
Obesity is a disorder of excess energy accumulation. The body puts energy (calories) into its fat tissues, storing it for later use. If more calories enter your fat tissue than leave it, you gain fat. Conversely, if more calories leave your fat tissue than enter it, you lose fat. All weight loss diets cause a reduction in calorie intake. Some do so by controlling calorie intake directly (counting calories, weighing portions, etc.), while others do so by reducing appetite so that you eat fewer calories automatically. When this happens, the number of calories leaving your fat tissue (calories out) becomes greater than the number of calories entering it (calories in). Thus, you lose fat, which your body views as the beginning of starvation.

As a result, your body fights back, doing everything it can to make you stop losing. The body and brain can respond by making you hungrier (so you eat more, increasing calories in), but they can also affect the number of calories you burn (calories out). Starvation mode implies that your body reduces calories out to restore energy balance and stop you from losing any more weight, even in the face of continued calorie restriction. This phenomenon is very real, but whether it’s so powerful that it can prevent you from losing weight — or even cause you to gain weight despite continued calorie restriction — is not as clear.

Levels of these four measurements can decrease when you cut calories and lose weight. This is due to a reduction in movement (both conscious and subconscious) and major changes in the function of the nervous system and various hormones.The most important hormones are leptin, thyroid hormone, and norepinephrine. Levels of all of these hormones can decrease with calorie restriction.