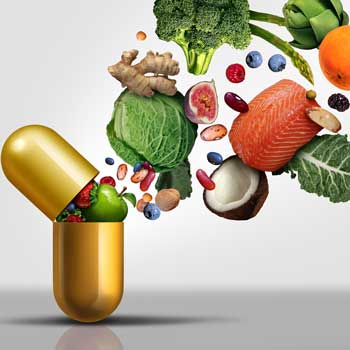 Brittle hair and nails can be a result of being deficient in Biotin. Biotin, also known as vitamin B7, helps the body convert food into energy. A deficiency in biotin is very rare, but when it occurs, brittle, thinning, or splitting hair and nails are some of the most noticeable symptoms. Other symptoms of biotin deficiency include chronic fatigue, muscle pain, cramps, and tingling in the hands and feet. Taking biotin supplements and eating things such as egg yolks, organ meats, fish, meat, dairy, nuts, seeds, spinach, broccoli, cauliflower, sweet potatoes, yeast, whole grains, and bananas can increase biotin levels.

Lesions in and around the mouth may partly be linked to an insufficient intake of certain vitamins or minerals. For instance, mouth ulcers, also commonly referred to as canker sores, are often the result of deficiencies in iron or B vitamins. One small study notes that patients with mouth ulcers appear to be twice as likely to have low iron levels. In another small study, around 28% of patients with mouth ulcers had deficiencies in thiamine (vitamin B1), riboflavin (vitamin B2), and pyridoxine (vitamin B6). Angular cheilitis, a condition that causes the corners of the mouth to crack, split, or bleed, can be caused by excess salivation or dehydration. However, it may also be caused by an insufficient intake of iron and B vitamins, particularly riboflavin. Foods rich in iron include poultry, meat, fish, legumes, dark leafy greens, nuts, seeds, and whole grains.

Sometimes a rough tooth brushing technique is at the root of bleeding gums, but a diet lacking in vitamin C can also be to blame. Vitamin C plays an important role in wound healing and immunity, and it even acts as an antioxidant, helping prevent cell damage. Your body does not make vitamin C on its own, so the only way to maintain adequate levels of it is through diet. Vitamin C deficiencies are rare in individuals who consume enough fresh fruits and vegetables. That said, many people fail to eat enough fruits and vegetables each day.

A nutrient-poor diet can sometimes cause vision problems. For instance, low intakes of vitamin A are often linked to a condition known as night blindness, which reduces people’s ability to see in low light or darkness. That’s because vitamin A is necessary to produce rhodopsin, a pigment found in the retinas of the eyes that helps you see at night. When left untreated, night blindness can progress to xerophthalmia, a condition that can damage the cornea and ultimately lead to blindness. Another early symptom of xerophthalmia is Bitot’s spots, which are slightly elevated, foamy, white growths that occur on the conjunctiva or white part of the eyes. The growths can be removed to a certain extent but only fully disappear once the vitamin A deficiency is treated. Fortunately, vitamin A deficiency is rare in developed countries. Those who suspect their vitamin A intake is insufficient can try eating more vitamin-A-rich foods, such as organ meats, dairy, eggs, fish, dark leafy greens, and yellow orange colored vegetables.

Seborrheic dermatitis (SB) and dandruff are part of the same group of skin disorders that affects the oil-producing areas of your body. Both involve itchy, flaking skin. Dandruff is mostly restricted to the scalp, whereas seborrheic dermatitis can also appear on the face, upper chest, armpits, and groin. The likelihood of these skin disorders is highest within the first 3 months of life, during puberty, and in mid-adulthood. Studies show that both conditions are also very common. Up to 42% of infants and 50% of adults may suffer from dandruff or seborrheic dermatitis at one point or another. Dandruff and seborrheic dermatitis may be caused by many factors, with a nutrient-poor diet being one of them. For instance, low blood levels of zinc, niacin (vitamin B3), riboflavin (vitamin B2), and pyridoxine (vitamin B6) may each play a role.

Hair loss is a very common symptom. In fact, up to 50% of adults report hair loss by the time they reach 50 years of age. A diet rich in the following nutrients may help prevent or slow hair loss. • Iron. This mineral is involved in DNA synthesis, including that of the DNA present in hair follicles. Too little iron can cause hair to stop growing or fall out. • Zinc. This mineral is essential for protein synthesis and cell division, two processes needed for hair growth. As such, zinc deficiency may cause hair loss. • Linoleic acid (LA) and alpha-linolenic acid (ALA). These essential fatty acids are required for hair growth and maintenance. • Niacin (vitamin B3). This vitamin is necessary for keeping hair healthy. Alopecia, a condition in which hair falls out in small patches, is one possible symptom of niacin deficiency. • Biotin (vitamin B7). Biotin is another B vitamin that, when deficient, may be linked to hair loss. Meat, fish, eggs, legumes, dark leafy greens, nuts, seeds, and whole grains are good sources of iron and zinc. Niacin-rich foods include meat, fish, dairy, whole grains, legumes, nuts, seeds, and leafy greens. These foods are also rich in biotin, which is also found in egg yolks and organ meat.

Keratosis pilaris is a condition that causes goosebump-like bumps to appear on the cheeks, arms, thighs, or buttocks. These little bumps may also be accompanied by corkscrew or ingrown hairs. The condition often appears in childhood and naturally disappears in adulthood. The cause of these little bumps is still not fully understood, but they may appear when too much keratin is produced in hair follicles. This produces red or white elevated bumps on the skin. Keratosis pilaris may have a genetic component, meaning that a person is more likely to have it if a family member has it. That said, it has also been observed in people with diets low in vitamins A and C.

Restless leg syndrome (RLS), also known as Willis-Ekbom disease, is a nerve condition that causes unpleasant or uncomfortable sensations in the legs, as well as an irresistible urge to move them. According to the National Institute of Neurological Disorders and Stroke, RLS affects up to 10% of Americans, with women twice as likely to experience the condition. For most people, the urge to move seems to intensify when they’re relaxing or trying to sleep. While the exact causes of RLS are not fully understood, there appears to be a link between symptoms of RLS and a person’s blood iron levels. For instance, several studies link low blood iron stores to an increased severity of RLS symptoms. Several studies also note that symptoms often appear during pregnancy, a time during which women’s iron levels tend to drop. Supplementing with iron generally helps decrease RLS symptoms, especially in people with a diagnosed iron deficiency. However, the effects of supplementation may vary from person to person.