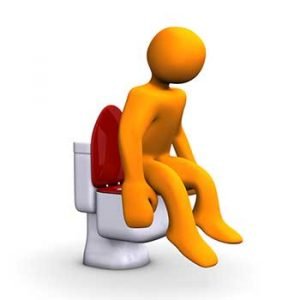 What exactly is poop? Well, it’s mostly just undigested food, proteins, bacteria, salts, and other substances that are produced and released by intestines. Although everyone is unique in the size, shape, and smell of their poop, there are a few things that indicate a healthy (or unhealthy) poop.

What is normal poop?
Healthy poop can be as varied and as unique as the individuals who make it. But there are a few general rules to follow if you want to assess your poo artistry for optimum health.

Color: The poop emoji has one thing right — the brown coloring. Bilirubin, which is a pigment compound formed from the breakdown of red blood cells in the body, gets the credit for this oh-so-lovely shade of brown.

Shape: A somewhat log like shape is how most poop should come out due to its formation within the intestines. However, as we’ll get to later, there are a variation of shapes that poop can have.  And when they differentiate from the log/sausage shape, that’s when your poop is trying to tell you something’s up.

Size: Poops shouldn’t come out in small pellets (something else we’ll get to later) but instead should be a couple inches in length, comfortable and easy to pass.

Consistency: Anywhere between a firm and soft consistency is pretty much normal. If it sways one way or another, it could suggest some digestion or fiber issues.

Length of time (how long it takes): A commonly heard joke is that when someone takes too long in the bathroom, it must mean they’re pooping. A healthy poop, however, should be easy to pass and take only a minute to push out. That said, some people do spend a bit more time on the toilet, so as a general rule, a poop should take no more than 10 to 15 minutes.

Frequency (how often): Fun fact: Did you know most people poop around the same time every day? On average, a person with healthy digestion will poop anywhere between every other day to three times a day. Any less could suggest possible constipation. This means you need some more water to move the “boat.”

Type 2 – Appearance: Log-shaped but lumpy
Indicates: Here we have another sign of constipation that, again, shouldn’t happen frequently.

Type 3 – Appearance: Log-shaped with some cracks on the surface
Indicates: This is the gold standard of poop, especially if it’s somewhat soft and easy to pass.

Type 4 – Appearance: Smooth and snake-like
Indicates: Doctors also consider this a normal poop that should happen every one to three days.

Type 5 – Appearance: These are small, like the first ones, but soft and easy to pass. The blobs also have clear cut edges.
Indicates: This type of poop means you are lacking fiber and should find ways to add some to your diet through cereal or vegetables.

Type 6 – Appearance: Fluffy and mushy with ragged edges.
Indicates: This too-soft consistency could be a sign of mild diarrhea. Try drinking more water and fruit juice to help improve this.

Type 7 – Appearance: Completely watery with no solid pieces.
Indicates: In other words, you’ve got the runs, or diarrhea. This means your stool moved through your bowels very quickly and didn’t form into a healthy poop.

Black: If you’ve had licorice, iron supplements, or bismuth medications (such as Pepto-Bismol), that could be the explanation behind black stool. If you haven’t had any of that, black poop could be a sign of bleeding in the upper gastrointestinal tract. It may seem like red would be a more likely color for this sort of concern, but since it’s taken a while to travel down, it’s older and therefore darker.

Green: Like we mentioned, hints of green are actually quite normal. But when it’s pretty much turned from brown to full green, it means one of two things. Either you’ve added lots of green foods like spinach to your diet, or your stools passing through you too fast. When it doesn’t pick up as much of the brown-tinting bilirubin, it has more bile salts that turn it this color.

Pale, white, or clay-colored: If your poop is a chalky light shade, it probably means you’re lacking bile. Bile is a digestive fluid that comes from your liver and gallbladder, so if you’re producing white stool, it probably means your duct is blocked. Pale poop could also be a side-effect of certain medications like anti-diarrhea medicine. Either way, if it continues, you should probably consult a doctor.

Red: You’re probably not surprised to hear that red poop can mean bleeding, either due to hemorrhoids or to bleeding in the lower intestinal tract. If your stool is red, though, there’s no need to immediately fret. There are other less-serious reasons for the change in color. Foods like beets, cranberries, red gelatin, or tomato juice can turn poop red as well.

Yellow: Greasy, stinky, yellow stool is typically a sign of too much fat. This could also be a direct relation to a malabsorption disorder like celiac disease, where your body isn’t absorbing enough nutrients.

If any less-urgent, abnormal pooping habits carry on for more than a couple days, you should talk to a healthcare professional. A green poop here or hard poop there happens to the best of us. It’s when this type of irregularity carries on for more than a day or two that you should take action and talk to a doctor. The same goes for changes that are less concerning. like changes in color or consistency, or constipation. Most seriously, chronic constipation can obstruct the bowels, while chronic diarrhea can make it difficult for a person to absorb necessary nutrients from food. Both chronic constipation and chronic diarrhea could even be a sign for more serious conditions. Again, the first sign of either of these should not be immediate cause for concern, but keep an eye on it and see if it lasts more than a few days. That said, pay attention to any signs of blood. If you haven’t eaten any of the foods, described above, that could possibly turn your poop this color, you should see a doctor immediately. As quick as we are to write it off, our poop can provide a wealth of knowledge about our health and ourselves. So next time you pop a squat, take note of what’s going on. The toilet bowl is a window into your health and you.