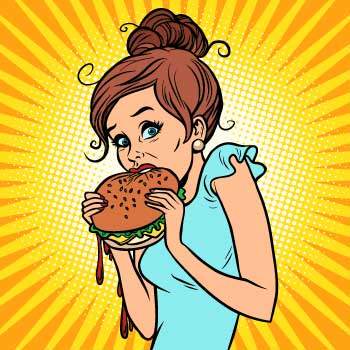 People tend to get cravings when the brain starts calling for certain foods — often processed foods that aren’t considered healthy or nutritious. Even though the conscious mind knows they’re unhealthy, some other part of the brain seems to disagree. Some people don’t experience this and can easily control the types of foods they eat, while others can’t. This isn’t due to a lack of willpower — it’s a much more complex situation. The fact is junk food stimulates the reward system in the brain in the same way as addictive drugs, such as cocaine. For susceptible people, eating junk food can lead to full-blown addiction, which shares the same biological basis as drug addiction.

How does food addiction work?
There is a system in the brain called the reward system. This system was designed to reward the brain when a person is doing things that encourage survival. This includes primal behaviors like eating. The brain knows that when a person eats, they’re doing something right, and it releases feel-good chemicals in the reward system. These chemicals include the neurotransmitter dopamine, which the brain interprets as pleasure. The brain is hardwired to seek out behaviors that release dopamine in the reward system. The problem with modern junk food is that it can cause a reward that is way more powerful than any reward the brain can get from whole foods. Whereas eating an apple or piece of steak might cause a moderate release of dopamine, eating a Ben & Jerry’s ice cream is so rewarding that it releases a larger amount.

Tolerance and withdrawal — the hallmarks of physical addiction
When a person repeatedly does something that releases dopamine in the reward system, such as smoking a cigarette or eating a Snickers bar, dopamine receptors can start to down regulate. If the brain observes that the amount of dopamine is too high, it begins removing dopamine receptors to keep things balanced. When there are fewer receptors, more dopamine is needed to reach the same effect, which causes people to start eating more junk food to reach the same level of reward as before. This is called tolerance. If there are fewer dopamine receptors, the person will have very little dopamine activity and start to feel unhappy when they don’t get a junk food “fix.” This is called withdrawal. Tolerance and withdrawal have been associated with addictive disorders.

Cravings are a key feature of addiction
A craving is an emotional state characterized by a desire to consume a certain food. It should not be confused with simple hunger, which is different. Cravings sometimes seem to appear out of thin air. A person might be doing mundane things like watching a favorite TV show, walking the dog, or reading. Then suddenly a craving for something like ice cream appears. Even though the cravings sometimes seem to come out of nowhere, they can be turned on by certain triggers, which are known as cues.These cues can be as simple as walking past an ice cream parlor or smelling a pizza. However, they can also be induced by certain emotional states, such as feeling depressed or lonely, a behavior known as emotional eating. A true craving is about satisfying the brain’s need for dopamine. It has nothing to with the body’s need for energy or nourishment. For those with food addiction, these cravings can be so powerful that they cause people to break rules they set for themselves, such as only eating unhealthy food on Saturdays. They may repeatedly overeat, despite knowing that it’s causing physical harm.

Cravings can sometimes turn into binges
When acting on cravings, the brain gets a reward — a feeling of pleasure associated with the release of dopamine. The reward is what cravings and food addiction are all about. People with food addiction get their “fix” by eating a particular food until their brain has received all of the dopamine it was missing. The more often this cycle of craving and rewarding is repeated, the stronger it becomes and the greater the quantity of food that’s needed each time. While four scoops of ice cream were enough 3 years ago, today it may take eight scoops to experience the same level of reward. It can be almost impossible to eat in moderation when satisfying an addiction driven craving.

This can lead to complicated, addictive behaviors
Over time, food addiction can cause severe physical and psychological problems. Many people who have been struggling with food addiction for a long time keep their eating habits a secret. They may also be living with depression or anxiety, which can contribute to addiction. This is compounded by the fact that most people aren’t aware they’re experiencing food addiction. They may not realize they need help to overcome food addiction and that getting treatment for depression and anxiety can also help with addiction treatment.

Overcoming food addiction
Unfortunately, there is no easy solution to addiction. There is no supplement, mental trick, or magical remedy. For many, it may be best to avoid trigger foods completely. Food addiction may require professional help to overcome. Psychiatrists and psychologists can help. There are also organizations like Overeaters Anonymous (OA), which anyone can join for free. Binge eating disorder, which is associated with food addiction, is currently classified as a feeding and eating disorder in the Diagnostic and Statistical Manual of Mental Disorders (DSM–5), the official manual that mental health professionals use to define mental disorders.